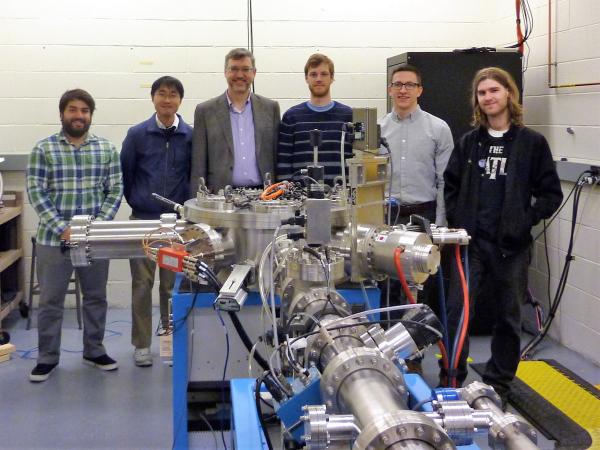 NIF Director, Dr. Mark Herrmann (3rd from left), with MIT graduate students  (left to right), Neel Kabadi, Hong Sio, Graeme Sutcliffe, Chris Wink, and Brandon Lahmann, at the HED Physics accelerator facility, which the students utilize to test and develop the diagnostics and instrumentation they use on NIF and other ICF fusion facilities.

MIT’s IAP brought National Ignition Facility (NIF) Director Mark Hermann to the Plasma Science and Fusion Center (PSFC) in January to talk about the science behind the inertial confinement fusion (ICF) experiments at Lawrence Livermore National Laboratory (LLNL). The visit gave Director Hermann the opportunity to connect with Ph.D. students who are directly involved in research at the NIF. PSFC graduate students Neel Kabadi, Hong Sio, Graeme Sutcliffe, Chris Wink, and Brandon Lahmann are following in the footsteps of NIF’s first PhD students: Dan Casey, Mike Rosenberg, Hand Rinderknecht, and Alex Zylstra.  Like their predecessors, they are part of the PSFC’s High-Energy-Density Physics division, and are all deeply involved with NIF data, diagnostics and analyses.

Neel Kabadi is currently working to increase our understanding of inertial confinement fusion implosion dynamics. In particular, the diagnostic he works with is a synthetic diamond-based particle time-of-flight detector called pTOF.  pTOF, and a close variant, is regularly used at the NIF and the University of Rochester’s OMEGA laser facility, respectively, to measure nuclear bang time, an important parameter that indicates when fusion reactions peak in the imploding capsule. Neel's immediate goal is to fully characterize pTOF so that it can also measure the fuel areal density, another important implosion parameter.

Hong Sio's research is focused on understanding kinetic and multiple-ion-fluid effects in ICF plasmas.  He is developing time-resolved nuclear and x-ray diagnostics to better probe ICF implosions on the OMEGA laser facility and the NIF.

Graeme Sutcliffe is designing a sensitive, low-energy charged particle spectrometer for probing nuclear reactions relevant to Stellar Nucleosynthesis (SN) and Big-Bang Nucleosynthesis (BBN) at the OMEGA laser and the NIF. In contrast to conventional accelerators, these laser facilities are able to produce conditions comparable to those found in the center of stars, and are therefore very useful and unique for studying SN and BBN reactions.

Chris Wink is working on the next-generation neutron spectrometer for diagnosing the evolution of the fuel assembly and hot-spot formation in an ICF implosion at the NIF. This spectrometer, called MRSt, will measure the time resolved neutron spectrum from which the evolution of areal density, ion temperature and yield are determined. Specifically, Chris is working on particle transport simulations to design and optimize the MRSt shielding. He is also studying ion-optics and numerical simulations in order to correct aberrations in the focusing magnets.

Brandon Lahmann is responsible for fielding several compact charged-particles spectrometers for diagnosing asymmetries in an ICF implosion at the NIF. Additionally, Brandon is involved in the design and implementation of a compact neutron spectrometer for diagnosing experiments at the NIF and at Sandia National Laboratories’ Z machine, in order to measure implosion asymmetries.

The students all use the accelerator and x-ray facilities at the PSFC to test and develop the diagnostics and instrumentation they implement on the larger national facilities, including the National Ignition Facility at LLNL, the Omega Facility at the University of Rochester’s Laboratory for Laser Energetics, and the Z Facility at Sandia National Laboratories.

High-energy-density physics at the PSFC