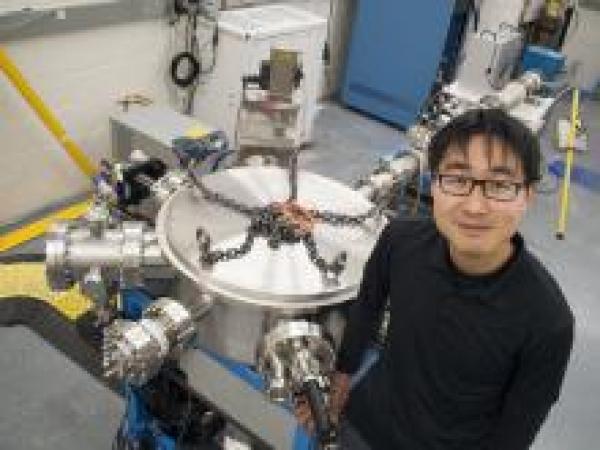 When at MIT, Hong Sio can be found in the PSFC High-Energy-Density Physics (HEDP) Accelerator Facility, which develops and characterizes nuclear diagnostics for inertial fusion facilities across the country, including NIF and OMEGA. He says, "The opportunity to be so deeply involved at these world-class facilities as a graduate student is nothing short of remarkable.”

Hong Sio: On the road for fusion

Graduate student Hong Sio has gotten used to being somewhere else. His research as part of the MIT Plasma Science and Fusion Center (PSFC) High-Energy-Density Physics (HEDP) team has rotated him from his Albany Street home facilities to projects on the OMEGA laser at the University of Rochester, and to collaborations on the National Ignition Facility (NIF) at Lawrence Livermore National Laboratory.

“I spent 120 days in hotel rooms last year,” he laughs. “Four months on the road.” All necessary to support the kind of research that recently earned his fusion diagnostic a spot on the cover of an American Institute of Physics (AIP) Journal.

Sio has been taking significant journeys since the age of ten, when his family immigrated from Macau to the US, settling in southern California. Sio credits a high school summer program at the University of California, Irvine with cementing his interest in science, and specifically fusion, a potential source of abundant energy that has been an elusive goal of scientists for decades.

Sio continued his interest in energy research as a Physics major at Harvey Mudd College.  He worked at the department’s high-intensity laser lab, which deepened his interest in lasers, fusion, and graduate study in physics.  When he interviewed at MIT with HEDP division head Richard Petrasso, Sio had found a situation, and a research group, that “checked off all the boxes.”

“I thought, ‘Well, this group shoots lasers at things; this group works on fusion.  What’s there to think about?’”  And his decision was made.

The decision immersed him in inertial confinement fusion (ICF) research, and has led to his Particle X-ray Temporal Diagnostic (PTXD) being featured on the cover of The AIP Review of Scientific Instruments (from the Proceedings of the 21st Topical Conference on High-Temperature Plasma Diagnostics).  Sio describes the ICF process:

“At the simplest level, we fill a tiny capsule with fusion fuel and fire many lasers at it simultaneously, compressing and heating the fuel. The hotter and more dense the fuel becomes, the more fusion reactions are generated.”

Researchers measure the nuclear products from these fusion reactions with special diagnostics in order to understand what is happening in the capsule and improve performance. In experiments on OMEGA, Sio’s PXTD has made it possible for the first time to take simultaneous measurements of X-rays and nuclear reactions during the energy-intense implosions of fusion fuel that characterize ICF fusion. The PXTD provides nuclear reaction history information during the “shock-burn” phase of the implosion, when the plasma fuel is particularly kinetic, characterized by high temperature and low density.

“We want to better understand this initial stage of ICF implosion, and what affect it has later on in the implosion when the shell finally collapses. And to understand whether current simulation tools are sufficient.”

Sio is also responsible for the magnetic Particle Time-of-Flight (magPTOF) diagnostic on the NIF. A project worked on by MIT graduate Hans Rinderknecht when he was part of the HEDP team, the diagnostic simultaneously measures shock- and compression-bang times – the moments of peak thermonuclear burn during ICF implosions.  Being able to directly measure the shock-bang and compression-bang times helps researchers better understand the physics involved in ICF implosions, and provides necessary feedback for the next experiments.

Both his diagnostic and physics projects on OMEGA and the NIF support reaching ignition and a path to fusion energy.  Sio recognizes that fusion energy is an immense physics and engineering challenge.  He sees inertial confinement fusion as an integral part of the international fusion program, as one of several diverse approaches to making fusion work.

A recipient of the Department of Energy National Nuclear Security Administration Stewardship Science Graduate Fellowship (DOE NNSA SSGF), Sio will present his most recent research at the NNSA headquarters in Washington, D.C. on May 9, 2017.

Sio anticipates graduating from MIT in the fall of 2017, and hopes to continue contributing to ICF fusion research, possibly as a postdoc at MIT, or at other national ICF facilities like OMEGA or NIF, where his time on the road has already made him a familiar and welcome addition.