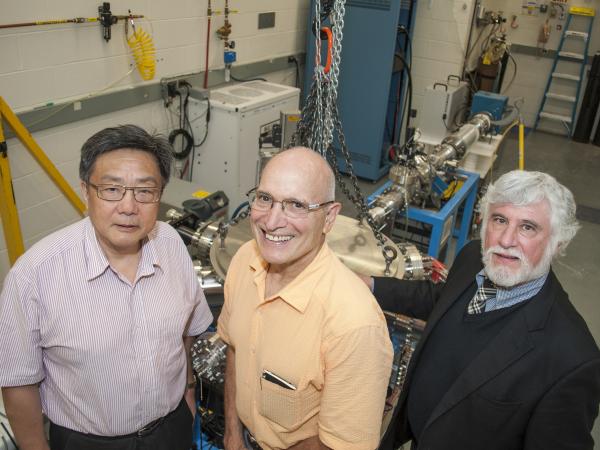 Left to right: Chikang Li, Richard Petrasso and Fredrick Seguin perform research in the PSFC High-Energy-Density Physics (HEDP) Accelerator Facility, which develops and characterizes nuclear diagnostics for inertial fusion facilities across the country. Petrasso notes, "This lab is important in training undergrads and grads. It allows them to build and develop an array of diagnostics and different platforms."

Three members of the Plasma Science and Fusion Center’s High-Energy-Density Physics Division have been honored with the American Physical Society’s John Dawson Award for Excellence in Plasma Physics Research. Division Head Richard Petrasso, Senior Research Scientist Chikang Li, and Research Scientist Fredrick Seguin were selected, along with three colleagues from other laboratories, to share the award for “the pioneering use of proton radiography to reveal new aspects of flows, instabilities, and fields in high-energy-density (HED) plasmas.”

The three PSFC researchers study the physics of inertial confinement fusion (ICF) plasmas and HED plasmas, collaborating with laser facilities like OMEGA at the Laboratory for Laser Energetics (LLE) and the National Ignition Facility (NIF) at Lawrence Livermore National Laboratory (LLNL). Because these plasmas occur on such short time-scales they are challenging to evaluate.  To help probe and examine the condition and evolution of these plasmas, and other phenomena, the PSFC team has developed what Petrasso calls a “Multiple-Monoenergetic-Particle Source (MMPS).”

“The MMPS is a backlighter, which allows us to irradiate experiments in order to better understand plasma structure and evolution,” says Petrasso. “It is especially useful for looking at plasma phenomena that happen on the order of a nanosecond or so. That phenomenon could be an ICF implosion, magnetic reconnection, or a lab astro experiment.”

Co-recipient Chikang Li, who used the MMPS for his recent exploration of the Crab Nebula, expressed his pleasure that the community recognizes the importance of their work and contributions to the field, noting, “I am even more glad that, as already indicated by numerous publications, this technique provides a unique and powerful diagnostic for the HED community.”

Petrasso credits LLE, LLNL and other collaborators for their support and involvement with PSFC research, as well as the National Nuclear Security Administration of the Department of Energy (NNSA), which has funded much of their work since the early 1990s. “Even though the three of us have been singled out, it really has been a broad effort, and very importantly one in which our students have been able to capitalize.” Two recent MIT graduates, Mario Manuel and Mike Rosenberg received the American Physical Society Rosenbluth Outstanding Doctoral Thesis Award in 2014 and 2016 respectively for research that employed the MMPS. Alex Zylstra, who received his PhD in 2016, has been nominated for the 2017 award for a thesis that also uses this technology.

“The PSFC has been a wonderful place, with great infrastructure to support this work,” notes Petrasso. “We are always trying to push the frontiers, and finding exciting opportunities for our students. Our success is measured by the impact our students make in the outside community. And trust me, they are having a big impact.”

Hong Sio: On the road to fusion (psfc.mit.edu)