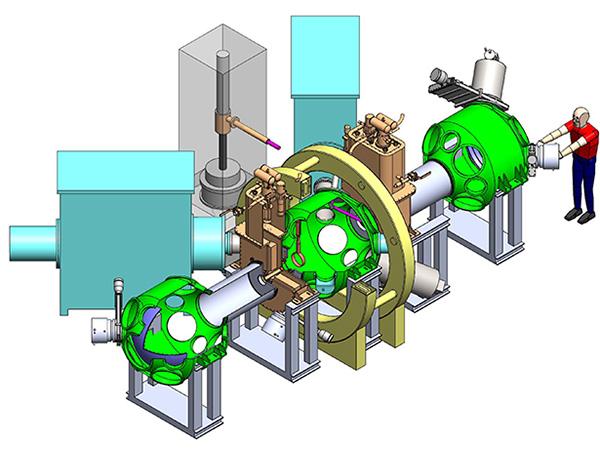 As part of an ARPA-E award, the PSFC will help explore new magnetic geometries for fusion devices, such as the mirror concept pictured here, in search of a faster and less expensive path to fusion energy.

Fusion requires confining plasmas at extraordinarily high temperatures, up to 200 million degrees. One of the most promising ways to heat plasmas to these temperatures is with electromagnetic waves. Fusion power plants will need tens of thousands of kilowatts to be launched and absorbed by the plasma – with each kilowatt roughly the power of a conventional microwave oven. Complex analytic theory and computer simulations are required to design effective and efficient plasma heating scenarios. MIT’s project seeks to apply established state-of-the-art theoretical and simulation tools, developed and tested by the fusion community on more traditional concepts like tokamaks and stellarators, to explore the potential of novel, lower-cost fusion concepts.

The principal investigator for the project, PSFC principal research scientist John Wright, along with PSFC principal research scientist Abhay Ram, comprise the MIT team that will be working with colleagues from Oak Ridge National Laboratory, Lawrence Livermore National Laboratory, and CompX a private company. They are excited about leveraging MIT radio-frequency (RF) heating expertise in the service of new, or renewed, approaches to fusion.

“The main fusion program pursues the tokamak and the stellarator,” says Wright, “but there are other magnetic geometries considered by the program in the past that have been set aside due to difficulties at the time. They may deserve a second look, to see if any of these have a shorter or cheaper path to fusion. These include the mirror concept, for which there are two ARPA-E experimental awards.”

While a tokamak confines hot plasma in a toroidal chamber, using high magnetic fields to steer it away from the interior walls, a mirror contains the plasma in a linear device that features higher strength magnets at each end. The PSFC will help explore the mirror’s potential both as a fusion concept and as a source of neutrons, which are needed to study the effect of neutrons on materials used in long-lived fusion or fission devices.

The PSFC will work closely with two other projects funded in this ARPA-E funding round — one led by the University of Wisconsin-Madison (UW–Madison) on magnetic mirrors, and another led by Commonwealth Fusion Systems (CFS) on fast-ramping high-temperature superconducting solenoids. The PSFC is a significant collaborator on the CFS-led project, responsible for testing the performance of the novel magnets built by CFS. If successfully demonstrated, these magnets will reduce the cost and complexity of commercial tokamak power plants, further accelerating the advent of commercial fusion. An immediate application for these magnets would be for the SPARC project, now under design by a joint team from MIT and CFS. The collaboration with UW–Madison grew out of discussions about applications of high-temperature super-conducting magnets to other fusion experimental configurations.

“The tools we have developed in the tokamak community can help other fusion concepts, including the mirror, to do as well as possible,” say Wright. “We are excited to take our knowledge of RF in tokamak and stellarator geometries and see what surprises there are as we travel other paths to fusion.”