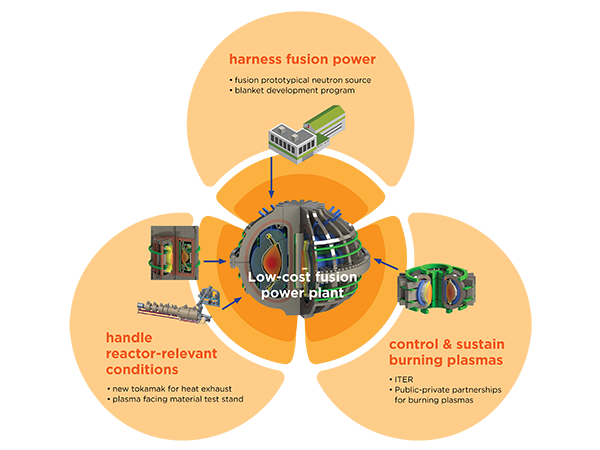 Fusion researchers endorse push for pilot power plant in US

The growing sense of urgency around development of fusion technology for energy production in the US got another boost this week, with the release of a community consensus report by a diverse group of researchers from academia, government labs, and industry. High among its recommendations is development of a pilot fusion power plant, an ambitious goal that would be an important step towards an American fusion energy industry.

The report — the first of its kind in almost 20 years and the product of a novel 15-month collaboration process — identifies high-priority scientific needs that can help fill gaps in fusion knowledge and facilitate the drive to making fusion a practical energy source. It will be used by the US Department of Energy’s Fusion Energy Sciences Advisory Committee (FESAC) as it undertakes a new phase of strategic planning for its Fusion Energy Sciences program, the primary US source of fusion research funding.

Some 300 members of the fusion community hammered out their consensus during three major workshop meetings and hundreds of online working-group sessions, using an anonymous voting process that gave all participants the chance to express themselves freely. The top energy-related priorities include:

Also identified were several “opportunities and research needs” that are broadly applicable across the fusion and plasma fields: use of advanced computing technologies for better understanding and modeling, development of improved plasma diagnostics, enhanced support for public-private partnerships, and embracement of diversity, equity, and inclusion, along with development of a more multidisciplinary workforce.

“This is first time in a generation when the fusion community has been called upon to self-organize and figure out its highest priorities for getting from fusion science to fusion energy,” says Bob Mumgaard, chief executive of MIT spinout Commonwealth Fusion Systems, one of a growing number of private companies pursuing fusion. “How we can get ready, with data, experience, test facilities — the things that are needed to support the science and eventually an industry.

“The National Academies of Science (NAS) issued a good report [in late 2018], that said we should be bold and do fusion now and create test facilities,” added Mumgaard. “But this is different because it’s the whole community, coming together in a very transparent grassroots effort to answer questions about what we’re doing, what needs to be done, and what we’re willing to not do. It wasn’t done in a back room but by scientists themselves, and they came out with a plan and priorities — it’s kind of cool.”

Nathan Howard, a research scientist at MIT’s Plasma Science and Fusion Center, was one of seven co-chairs who shared development oversight of the report, which will be used in developing long-range strategic plans for fusion science programs in response to a FESAC request issued in November 2018.

“The American Physical Society Division of Plasma Physics took the lead and brought together the seven of us to gather data from the community,” explains Howard. In addition to fusion energy, the effort also generated extensive recommendations for Discovery Plasma Science, a diverse field of more-basic research with impact in astrophysics, high energy density plasma physics, and other disciplines.

One important development along the way was the creation of deeper linkages between the group focused on magnetic-confinement fusion and the one focused on fusion-related materials and technologies.

“It really didn’t make sense for those to be separate,” notes Howard. “The merger occurred naturally during the process and was motivated in part by the NAS burning plasma report, which said the US should pursue building a fusion pilot plant, a reactor that will demonstrate creation of electricity from fusion and a closed fusion fuel cycle. The fusion community adopted construction of a pilot plant as its mission during the process”

While additional plasma research is important to achieving that goal, adds Howard, “the community recognized pretty clearly that we need more emphasis in fusion materials and technology. Where we’re most lacking in the progress towards a power plant is in areas such as design of the blanket [the area surrounding the reactor, used to breed fusion fuel] and fusion-relevant materials.”

Many of the outstanding materials issues are applicable not only to magnetic-confinement fusion, including the tokamak-type reactors which have received the most development attention to date, but also to inertial-confinement and other approaches, which offer different opportunities and challenges.

The report’s official recipient is a FESAC subcommittee chaired by Troy Carter, professor of physics at UCLA and director of the university’s Basic Plasma Science Facility and Plasma Science and Technology Institute. He praised Howard and the other co-chairs for “working incredibly hard to organize the effort and bring so many people together. The report is very compelling, and the whole community should be commended — this sets an example for future iterations of the process and makes the job of my subcommittee much easier.”

In particular, says Carter, “junior members of the community really stepped up. The co-chairs are junior and mid-career people for the most part, and it’s important that it’s their plan, because given the time scale, they’ll be the ones implementing it.”

Carter notes that, while he knew the concept of driving aggressively toward a pilot plant had support, “I was a bit surprised at how strongly it was embraced in the process. It’s ambitious and it points us in the direction of using innovation to get fusion energy onto the grid much quicker. There’s still a lot of work to do in core plasma physics, but we’ve also got to get working on materials and other technology, which we’re not putting enough effort towards now. It’s refreshing to see that broad support for changing direction.”

Carter’s group will now incorporate the report’s findings into strategic plans reflecting several budget scenarios it has been given.

“We’ll lay it all out to take advantage of the opportunities in science and push towards the goal of realizing a pilot plant. We’ve got really good information about initiatives and guidance on prioritization,” he says. “But a lot of the initiatives aren’t at the level of conceptual design, so we’ll have to do some work to figure out what they will cost. We have project management experts to work with, and also people from the private side — we have three members connected to private fusion companies and will also engage other external points of view.”

That process is expected to take about eight months, said Carter, with the results being submitted to FESAC around year end. After a vote it would become FESAC’s official advice to the Department of Energy. “It’s something a lot of folks in Congress are interested in,” notes Carter.

CFS’s Mumgaard says the report’s delivery could prove to be a key moment for the US, with the potential to lead to a new fusion policy, Congressional action to support the nascent fusion industry and prepare for power plant licensing and regulation, and ongoing funding that would give academic and national laboratory leaders confidence to hire staff and build infrastructure. “It feels like things are going in the right direction,” he says. “The scientific community has to speak with one voice, and this is the process that creates that voice.”