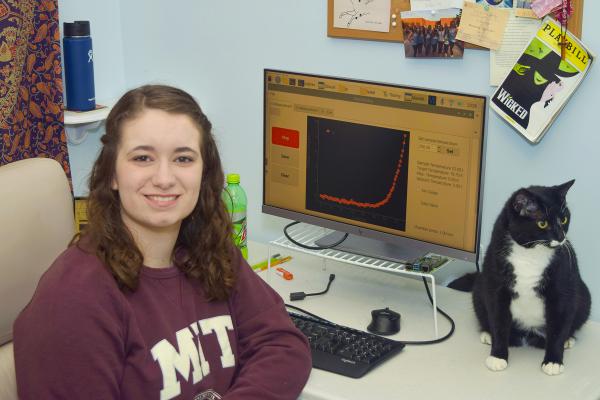 From her home in Alabama, Lauryn Kortman focuses on the analytical aspects of her fusion magnet research.

Rising sophomore finds satisfaction designing for the laboratory and the playing field.

When Lauryn Kortman enrolled in Founder’s Journey, MIT’s entrepreneur-based freshman seminar, she didn’t expect it would lead to a role in fusion research. As part of the program’s arranged visit to the Plasma Science and Fusion Center (PSFC), Kortman learned about SPARC, a new fusion experiment that expects to demonstrate a faster, and less expensive path to carbon-free energy. The project embodied her own entrepreneurial spirit and  sparked in her a desire to be part of the team.

“I emailed a bunch of PSFC researchers because I didn’t see any Undergraduate Research Opportunity Program (UROP) listing,” she says. “I wanted to see if I could get involved in the material side of the experiment.”

The materials science and engineering major’s request got the attention of PSFC Director Dennis Whyte and postdoctoral associate David Fischer, now her direct supervisor, who introduced her to ARC, a follow-up to SPARC. Both machines are conventional tokamaks, with magnets surrounding a toroidal vacuum chamber to confine the hot plasma fuel long enough for self-sustaining fusion to occur. Both will take advantage of a technologically advanced high-temperature superconducting (HTS) tape made of rare-earth barium copper oxide (REBCO), which will make it possible to design a more compact device. The magnets in SPARC, however, will endure pulses of plasma for only a few seconds, accumulating little damage over time. ARC is expected to run for longer periods, amassing damage that could alter the magnets’ superconducting properties.

Working with the DANTE electrostatic accelerator in MIT’s Vault Laboratory for Nuclear Science, Kortman was tasked with setting up the experiment and putting together all the components of the vacuum chamber, where the HTS tape would be tested. Fixed to a sample holder, the tape is bombarded with protons, which mars the microstructure. To study the effect of the resulting damage it is necessary to cool the sample to cryogenic temperatures and run a current over it, while measuring the voltage across it and looking for the point where the material becomes resistive. The onset of this resistance changes with the amount of radiation damage. Once the team understands how much radiation damage the tape can sustain, the necessary shielding can be determined to achieve the desired lifetime of the fusion magnets.

Kortman enjoyed the process of creating 3D drawings of the experimental setup, allowing the researchers to understand how much space they had to add more elements to the vacuum chamber. But when, in response to COVID-19, she returned home to Alabama, she found herself sharpening other necessary skills.

She is now coding the Graphical User Interfaces (GUI) that will be used to control part of the experiment and to acquire data. The task has required her to learn Python and develop skills she was not expecting to hone at this time.

“I do recognize it’s something I need to know,” she admits. “One of my big issues with coding in classes is we are doing it for something like a Hangman game. I kind of lose interest because I don’t see it being applied anywhere that would be useful. But I'm glad I’m able to do it for a project where I can see it actually being used.”

Kortman has always been more of a designer than a coder. As a majorette in high school, frustrated that she was not allowed to twirl a fire baton and unimpressed with the expensive “light-up” options available online, she designed her own illuminated version.

“I thought ‘OK, I have enough engineering experience at this point in my Junior year; why don’t I try to just make one myself.’ So, I started prototyping. My dad also helped me along the way, teaching me how to solder and make circuits. I pitched it to my band director to use it in a show and got the OK. So, I got to twirl my own LED baton my senior year, along with my majorette line.”

The performance led to requests from majorettes, coaches and parents, wondering where they could buy such a baton. Inspired by the enthusiasm, she decided to try to sell the unique item. She now heads her own company, FireFly Batons, LLC.

Although her return to Alabama has taken her out of the lab, it has put her back into baton production, which has been good for business. The baton, which features a custom-engineered LED-filled shaft, requires space and time to assemble. Although her father was willing to handle the bulk of the orders when his daughter left for MIT, the business was having a hard time finding its rhythm and really getting off the ground.

“We were about to close down the company,” she says, “but when coronavirus hit and I was sent home like everyone else it actually made an opportunity for me to be here and help out.”

Her focus on advertising and putting videos on social media has led to an uptick in sales since her return. She is happy to be dividing her summer between her business and her UROP assignment.

David Fischer has been impressed with her versatility. “She picks up new concepts fast,” he says. “She already has made good contributions and is now working mainly with our graduate student. I give them programming tasks and every week they show me the results and I think I have to step up the difficulty because they always can manage.”

Kortman is making the most of her time away and imagining what her next semester on campus will be like, whenever that might be. Perhaps she will join MIT’s Spinning Arts Club, which offers the opportunity to spin and throw batons lit with fire into the air.

But for now she is throwing light on a fusion future.