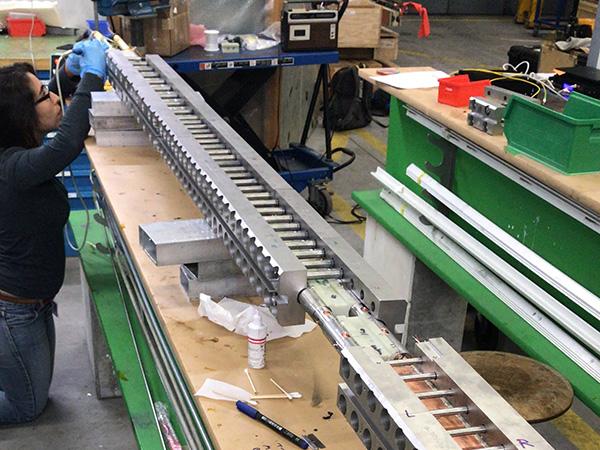 Erica Salazar and her team, like the entire SPARC research and development effort, approached its work with a focus on eventual commercialization, usability, and ease of manufacture, with an eye towards accelerating fusion’s viability as an energy source.

The pursuit of fusion as a safe, carbon-free, always-on energy source has intensified in recent years, with a number of organizations pursuing aggressive timelines for technology demonstrations and power plant designs. New-generation superconducting magnets are a critical enabler for many of these programs, which creates growing need for sensors, controls, and other infrastructure that will allow the magnets to operate reliably in the harsh conditions of a commercial fusion power plant.

A collaborative group led by Nuclear Science and Engineering (NSE) doctoral student Erica Salazar recently took a step forward in this area with a promising new method for quick detection of a disruptive abnormality, quench, in powerful high-temperature superconducting (HTS) magnets. Salazar worked with NSE assistant professor Zach Hartwig of the MIT Plasma Science and Fusion Center (PSFC) and Michael Segal of spinout Commonwealth Fusion Systems (CFS), along with members of the Swiss CERN research center and the Robinson Research Institute (RRI) at Victoria University in New Zealand to achieve the results, which were published in the journal Superconductor Science and Technology.

Quench occurs when part of a magnet’s coil shifts out of a superconducting state, where it has no electrical resistance, and into a normal resistive state. This causes the massive current flowing through the coil, and stored energy in the magnet, to quickly convert into heat, and potentially cause serious internal damage to the coil.

While quench is a problem for all systems using superconducting magnets, Salazar’s team is focused on preventing it in power plants based on magnetic-confinement fusion devices. These types of fusion devices, known as tokamaks, will maintain a plasma at extremely high temperature, similar to the core of a star, where fusion can occur and generate net-positive energy output. No physical material can handle those temperatures, so magnetic fields are used to confine, control, and insulate the plasma. The new HTS magnets allow the tokamak’s toroidal (doughnut-shaped) magnetic enclosure to be both stronger and more compact, but interruptions in the magnetic field from quench would halt the fusion process — hence the importance of improved sensor and control capabilities.

With this in mind, Salazar’s group sought a way of quickly spotting temperature changes in the superconductors, which can indicate nascent quench incidents. Their test bed was a novel superconducting cable developed in the SPARC program known as VIPER, which incorporates assemblies of thin steel tape coated with HTS material, stabilized by a copper former and jacketed in copper and stainless steel, with a central channel for cryogenic cooling. Coils of VIPER can generate magnetic fields 2-3 times stronger than the older-generation low temperature superconducting (LTS) cable; this translates into vastly higher fusion output power but also makes the energy density of the field higher, which places more onus on quench detection to protect the coil.

A focus on fusion’s viability

Salazar’s team, like the entire SPARC research and development effort, approached its work with a focus on eventual commercialization, usability, and ease of manufacture, with an eye towards accelerating fusion’s viability as an energy source. Her background as a mechanical engineer with General Atomics during production and testing of LTS magnets for the international ITER fusion facility in France gave her perspective on sensing technologies and the critical design-to-production transition.

“Moving from manufacturing into design helped me think about whether what we’re doing is a practical implementation,” explains Salazar. Moreover, her experience with voltage monitoring, the traditional quench-detection approach for superconducting cable, led her to think a different approach was needed. “During fault testing of the ITER magnets, we observed electrical breakdown of the insulation occurring at the voltage tap wires. Because I now consider anything that breaks high-voltage insulation to be a major risk point, my perspective on a quench detection system was, what do we do to minimize these risks, and how can we make it as robust as possible?”

A promising alternative was temperature measurement using optical fibers inscribed with micro-patterns known as fiber Bragg gratings (FBGs). When broadband light is directed at an FBG, most of the light passes through but one wavelength (determined by the spacing, or period, of the grating’s pattern) is reflected. The reflected wavelength varies slightly with both temperature and strain, so placement of a series of gratings with different periods along the fiber allows independent temperature monitoring of each location.

While FBGs have been leveraged across many different industries for measurement of strain and temperature, including on much smaller superconducting cables, they had not been used on larger cables with high current densities like VIPER. “We wanted to take good work by others and put it to the test on our cable design,” says Salazar. VIPER cable was well-adapted for this approach, she notes, because of its stable structure which is designed to withstand the intense electrical, mechanical, and electromagnetic stresses of a fusion magnet’s environment.

A new extension of FBGs

A novel option was provided by the RRI team, in the form of ultra-long fiber Bragg gratings (ULFBGs) — a series of 9mm FBGs spaced 1mm apart. These essentially behave as one long quasi-continuous FBG, but with the advantage that the combined grating length can be meters long instead of millimeters. While conventional FBGs can monitor temperature changes at localized points, ULFBGs can monitor simultaneously occurring temperature changes along their entire length, allowing them to provide very rapid detection of temperature variation, irrespective of the location of the heat source.

Although this means that the precise location of hot spots is obscured, it works very well in systems where early identification of a problem is of utmost importance, as in an operating fusion device. And a combination of ULFBGs and FBGs could provide both spatial and temporal resolution.

An opportunity for hands-on verification came via a CERN team working with standard FBGs on accelerator magnets at the CERN facility in Geneva. “They thought FBG technology, including the ULFBG concept, would work well on this type of cable and wanted to look into it, and got on board with the project,” says Salazar.

In 2019, she and colleagues journeyed to the SULTAN facility in Villigen, Switzerland, a leading center for superconducting cable evaluation operated by the Swiss Plasma Center (SPC), which is affiliated with Ecole Polytechnique Fédérale de Lausanne (EPFL), to evaluate samples of VIPER cable with optical fibers set into grooves on their outer copper jackets. Their performance was compared to traditional voltage taps and resistance temperature sensors.

The researchers were able to quickly and reliably detect small temperature disturbances under realistic operating conditions, with the fibers picking up early-stage quench growth before thermal runaway more effectively than the voltage taps. When compared to the challenging electromagnetic environment seen in a fusion device, the fibers’ signal-to-noise ratio was several times better; in addition, their sensitivity increased as quench regions expanded, and the fibers’ response times could be tuned. This enabled them to detect quench events tens of seconds faster than voltage taps, especially during slowly propagating quenches — a characteristic unique to HTS which is exceptionally difficult for voltage taps to detect in the tokamak environment, and which can lead to localized damage.

“[U]sing fiber optic technologies for HTS magnets quench detection or as a dual verification method with voltage show great promise,” says the group’s writeup, which also cites the manufacturability and minimal technological risk of the approach.

“The development of sensitive temperature measurements with FBGs is a very promising approach to the challenging problem of protecting HTS coils from damage during quenches,” observes Dr. Kathleen Amm, director of the Brookhaven National Laboratory Magnet Division, who was not affiliated with the research effort. “This is critical to the development of game-changing technologies like compact fusion, where practical, high-field, high-temperature superconducting magnets are a key technology. It also has the potential to solve the problem of quench protection for many industrial HTS applications.”

Work is underway on refining the location and installation of the fibers, including the type of adhesive used, and also on investigation of how the fibers can be installed in other cables and on different platforms, says Salazar.

“We’re having a lot of dialogue with CFS and continuing to coordinate with the RRI team’s ULFBG technology, and I am currently creating a 3D model of quench dynamics, so we can better understand and predict what quench would look like under different conditions,” states Salazar. “Then we can develop design recommendations for the detection system, like the type and spacing of the gratings, so it can detect in the desired length of time. That will allow the controls engineers and the engineers working on quench detection algorithms to write and optimize their code.”

Salazar praised the experimental team’s outstanding collegiality, noting, “the collaboration with RRI and CERN was special. We all converged in Switzerland, worked hard together, and had fun putting our efforts in and getting great results.”

Funding for this research was provided by CFS.