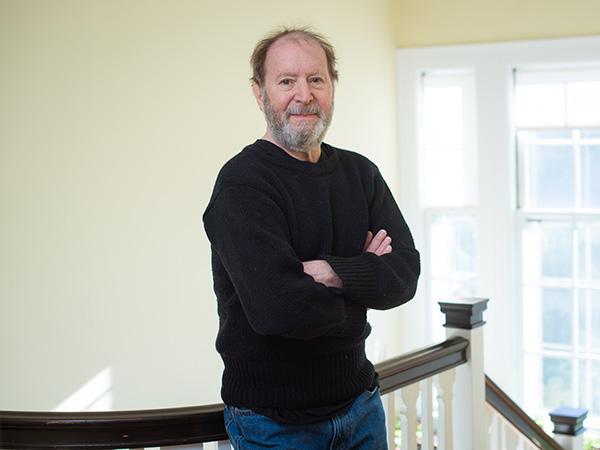 "We wanted our life’s work to mean something," says Martin Greenwald, as he reflects on over 40 years pursuing fusion energy research at MIT.

After four decades at the PSFC, researcher and deputy director embodies a brief history of fusion at MIT.

“One of the things I learned was, doing good science isn’t so much about finding the answers as figuring out what the important questions are.”

As Martin Greenwald retires from the responsibilities of senior scientist and deputy director of the Plasma Science and Fusion Center (PSFC), he reflects on his almost 50 years of science study, 43 of them as a researcher at MIT, pursuing the question of how to make the carbon-free energy of fusion a reality.

Greenwald credits Robert Langer, then a graduate student and now an MIT Institute Professor, for the insight about focusing on scientific questions back in 1973, when they worked together on enzyme kinetics at an MIT Chemical Engineering Laboratory. Having recently received his undergraduate degrees in Physics and Chemistry from MIT, Greenwald was getting some laboratory experience before trekking to the University of California at Berkeley, a school he chose in part to experience a west coast culture different from the Maryland suburbs and New England college towns he already knew so well.

At Berkeley he connected with plasma physicist Wulf Kunkle, compelled to learn more about fusion as an energy source that could have “a real societal impact.”

“You know, I’m from the 60s generation,” he notes. “We were very political and were always asking, ‘what’s the relevance.’ We wanted our life’s work to mean something.”

At the time, researchers were exploring new ideas for devices that could create and confine fusion plasmas. Greenwald became a research assistant on Berkeley’s “alternate concept”, TORMAC, a Toroidal Magnetic Cusp. “It didn’t work out very well,” he laughs. “The first thing I was known for was making the measurements that shut down the program.”

Believing the temperature of the plasma generated by the device would not be as high as his group leader expected, Greenwald set out to develop hardware that could use a laser scattering technique (Thomson Scattering) to measure the low temperatures predicted by his own “back of the envelope calculations.” Greenwald smiles remembering how, as he began his first measurements, a line of senior researchers arrived, pulling up chairs and creating an audience, turning an experiment into a drama. As he anticipated, his measurements showed that “this was not a fusion plasma; this was hardly a confined plasma at all.”

“It’s a very stressful situation for a graduate student to be in, where your measurements are proving the idea doesn’t work, and that this experiment and program have basically reached a dead end.”

With a PhD from Berkeley, Greenwald returned to MIT for a research position at the PSFC, attracted by the Center’s “esprit de corps.”

“It was a small, scrappy group – small enough where you felt like, as the newest person on the team, you would have some impact.”

That impact started early when Greenwald, surprised that the computer data acquisition he had become used to in grad school was not available at MIT, suggested to then director Ronald Parker that “we really need to step of our game in this area.” Greenwald chuckles recalling Parker’s response: “Great. You’re in charge.” Since then, his role as Head of PSFC Office for Computer Services and group leader for data acquisition and computing has ably supported the Center’s fusion progress.

He arrived in time to participate in the final experiments on Alcator A, the first in a series of tokamaks built at MIT, all characterized by compact size and featuring high-field magnets. The tokamak design was then becoming favored as the most effective route to fusion: its doughnut-shaped vacuum chamber, surrounded by poloidal and toroidal magnetic fields, could confine the turbulent plasma long enough, while increasing its heat and density, to make fusion occur.

Alcator A showed that the energy confinement time improves in relation to increasing plasma density. MIT’s succeeding device, Alcator C, was designed to use higher magnetic fields, boosting expectations that there would be higher densities and better confinement. So team members were surprised and disappointed when, at a certain point in the experiment, the confinement plateaued.

To overcome this challenge, Greenwald pursued a new technique being developed at Oak Ridge National Laboratory (ORNL), which increased density by injecting pellets of frozen fuel into the plasma, a method Greenwald has likened to throwing “snowballs in hell.” Undaunted by a union strike at ORNL, Greenwald ended up building his own pellet injector with the help of a graduate student, an engineer and a technician. Taking a chance on using frozen deuterium, which might break the injector, instead of the softer frozen hydrogen pellets, the team witnessed increasing plasma densities. Despite a last-minute problem involving a major upgrade to the tokamak, which derailed the experiment for twelve days, Greenwald was able to collect his data in time to present it at the annual American Physical Society Division of Plasma Physics (APS DPP) meeting.

This work was notable for the creation of a new regime of enhanced plasma confinement on Alcator C. In those experiments, a confined plasma surpassed for the first time one of the two Lawson criteria – the minimum required value for the product of the plasma density and confinement time – for making net power from fusion. This had been a milestone for fusion research since their publication by John Lawson in 1957.

“At the APS DPP meeting there was a big splash, lots of publicity and a lot of attention,“ says Greenwald,  “which really demonstrated that even a small university experiment, because we use high field magnets, could achieve really remarkable performance.”

Greenwald continued to make a name for himself as part of a larger study into the physics of the Compact Ignition Tokamak (CIT) – a high-field burning plasma experiment that the U.S. program was proposing to build in the late 1980s. He delved into the common observation that there is a limit to the density a plasma can achieve. This limit can, in many cases, cap the fusion power that could be produced, and so was important for predicting the performance of CIT. A review of the literature showed Greenwald the existing scaling laws – empirical predictions - were not in agreement with a large set of newer data. Neither was the physics proposed for the density limit consistent with experimental observations. He wrote a paper proposing a new scaling and a new physical mechanism for the limit. What ultimately became known as the “Greenwald Density Limit,” based on data from Alcator C and several other U.S. tokamaks, has been used to accurately predict performance on much larger machines built since. “It’s been surprisingly durable,” says Greenwald, “and the proposed physics still seems like the right model.”

The Center’s next tokamak, Alcator C-Mod, started operation in 1993 and ran for more than 20 years, with Greenwald as the Chair of its Experimental Program Committee. Increasing Alcator C’s size and reshaping its torus, the PSFC built a machine that would use the kind of radiofrequency (RF) heating necessary for a fusion power plant, rather than the flexible, but less practical, neutral beam heating typically used for experiments.

“If a power plant is going to have to run on RF heating, we had better learn how to do it, was our attitude,” he says. “For similar reasons, we made the choice to line the vacuum vessel with molybdenum tiles instead of graphite. It was more challenging, but would eventually be required for a fusion power system.”

C-Mod proved to be MIT’s most enduring fusion experiment to date, producing important results for twenty years. Some of Greenwald’s most vivid memories of the device, however, center on the PSFC’s response to the US Department of Energy’s (DOE) decision to stop funding the experiment. With crucial research, unfinished doctoral theses and dozens of jobs on the line, the PSFC and MIT mounted an effort to educate Congress about the need for the program. As Chair of the DOE’s Fusion Energy Science Advisory Committee (FESAC) at that time, Greenwald found himself constantly recusing himself from any debates or votes that could directly affect PSFC funding. Ultimately, the Center was able to gain enough congressional support to provide an additional three years of research along with a major boost to the rest of the U.S fusion program.

“People at different degrees of seniority within the PSFC did their part to make our case,” says Greenwald, “but the young people were particularly effective and passionate, because they were talking about their futures, and they were talking to their peers – the congressional staffers.”

Greenwald’s appreciation for young researchers echoes back at him from those he has mentored over the years. Research scientist Ryan Sweeney notes that “Martin quickly gained my trust as a mentor, in part due to his often casual dress and slightly untamed hair, which are embodiments of his transparency and his focus on what matters. He can quiet a room of PhDs and demand attention not by intimidation but rather by his calmness and his ability to bring clarity to complicated problems, be they scientific or human in nature.”

A sounding board for SPARC

Greenwald had the chance to work closely with the group of students who, in PSFC Director Dennis Whyte’s class, came up with the tokamak concept that evolved into SPARC. MIT is now pursuing this compact, high-field tokamak with Commonwealth Fusion Systems (CFS), a start-up that grew out of the collective enthusiasm for this concept, and the growing realization it could work.

“The students and postdocs had brainstormed on just how small a high-field machine could be and still produce a gain greater than 1. My initial role was validating the ideas – confirming that predictions using certain physics rules would perform as we desired.”

After realizing the concept could work, Greenwald joined daily meetings strategizing how to organize and fund the effort, leading him to help cofound CFS with five others. As Head of the Physics Group for the SPARC project at MIT, he has helped confirm the device’s physics basis in order to predict performance and guide engineering decisions.

“Martin’s multi-faceted talents are thoroughly embodied by, and imprinted on, SPARC” says PSFC Director Dennis Whyte. “First his leadership in its plasma confinement physics validation and publication place SPARC on a firm scientific footing. Secondly, the impact of the density limit he discovered, which shows that fuel density increases with magnetic field and decreasing the size of the tokamak, is critical in obtaining high fusion power density not just in SPARC, but in future power plants. Third, and perhaps most impressive, is Martin’s mentorship of the SPARC generation of leadership.”

The success of SPARC’s high temperature superconducting (HTS) magnets, tested in September 2021, has attracted record funding for a prototype fusion power plant being built in Devens, MA, as well as supporting research at MIT.

“None of us would have imagined that in a few years we would go from a few people sitting around in the conference room brainstorming to a multibillion-dollar corporation.”

Greenwald’s expertise and easy-going personality has made him an asset to many professional committees, including the APS DPP executive committee, the Institute for Plasma Physics advisory board and the ESnet steering committee. He has been an APS Fellow since 2000, and was an APS Distinguished Lecturer in Plasma Physics (2001/2002). He was also presented in 2014 with a Leadership Award from Fusion Power Associates. He is currently an associate editor for Physics of Plasmas and a member of the Lawrence Livermore National Laboratory Physical Sciences Directorate External Review Committee.

Although leaving his full-time responsibilities, Greenwald will remain at MIT as a Visiting Scientist, a role he says will allow him to “stick my nose into everything without being responsible for anything.”