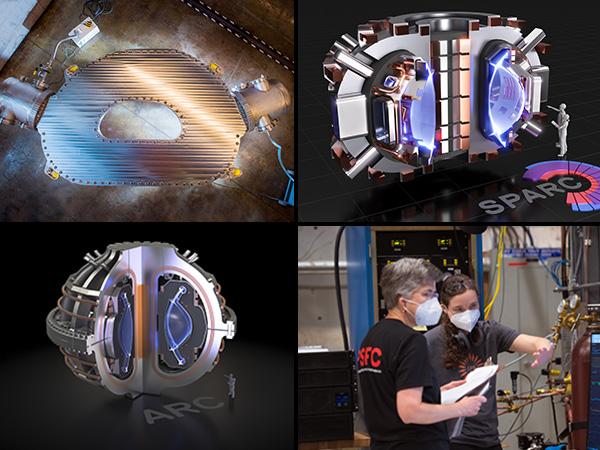 The new agreement doubles CFS’ financial commitment to PSFC, enabling greater recruitment and support of students, staff, and faculty in addition to diverse research in fusion science and technology.

Photographs by Gretchen Ertl. Renderings of SPARC and ARC by MIT PSFC and CFS.

“This expanded relationship puts MIT and PSFC in a prime position to be an even stronger academic leader that can help deliver the research and education needs of the burgeoning fusion energy industry, in part by utilizing the world's first burning plasma and net energy fusion machine, SPARC” says PSFC director Dennis Whyte. “CFS will build SPARC and develop a commercial fusion product, while MIT PSFC will focus on its core mission of cutting-edge research and education.”

Commercial fusion energy has the potential to play a significant role in combatting climate change, and there is a concurrent increase in interest from the energy sector, governments, and foundations. The new agreement, administered by the MIT Energy Initiative (MITEI), where CFS is a Startup Member, will help PSFC expand its fusion technology efforts with a wider variety of sponsors. The collaboration enables rapid execution at scale and technology transfer into the commercial sector as soon as possible.

This new agreement doubles CFS’ financial commitment to PSFC, enabling greater recruitment and support of students, staff, and faculty. “We’ll significantly increase the number of graduate students and post-docs, and just as important they will be working on a more diverse set of fusion science and technology topics,” notes Whyte. It extends the collaboration between PSFC and CFS that resulted in numerous advances towards fusion power plants, including last fall’s demonstration of a high-temperature superconducting (HTS) fusion electromagnet with record-setting field strength of 20 tesla.

The combined magnetic fusion efforts at PSFC will surpass those in place during the operations of the pioneering Alcator C-Mod tokamak device that operated from 1993-2016. This increase in activity reflects a moment when multiple fusion energy technologies are seeing rapidly accelerating development worldwide, and the emergence of a new fusion energy industry that would require thousands of trained people.

MITEI director Robert Armstrong adds, “Our goal from the beginning was to create a membership model that would allow startups who have specific research challenges to leverage the MITEI ecosystem, including MIT faculty, students, and other MITEI members. The team at the PSFC and MITEI have worked seamlessly to support CFS, and we are excited for this next phase of the relationship.”

PSFC is supporting CFS’ efforts towards realizing the SPARC fusion platform, which facilitates rapid development and refinement of elements (including HTS magnets) needed to build ARC, a compact, modular, high-field fusion power plant that would set the stage for commercial fusion energy production. The concepts originated in Whyte’s nuclear science and engineering class 22.63 (Principles of Fusion Engineering) and have been carried forward by students and PSFC staff, many of whom helped found CFS; the new activity will expand research into advanced technologies for the envisioned pilot plant.

“This has been an incredibly effective collaboration that has resulted in a major breakthrough for commercial fusion with the successful demonstration of revolutionary fusion magnet technology that will enable the world's first commercially relevant net energy fusion device, SPARC, currently under construction,” said Bob Mumgaard, CEO of Commonwealth Fusion Systems and MIT alum. “We look forward to this next phase in the collaboration with MIT as we tackle the critical research challenges ahead for the next steps toward fusion power plant development.”

In the push for commercial fusion energy, the next five years are critical, requiring intensive work on materials longevity, heat transfer, fuel recycling, maintenance, and other crucial aspects of power plant development. It will need innovation from almost every engineering discipline. “Having great teams working now, it will cut the time needed to move from SPARC to ARC, and really unleash the creativity. And the thing MIT does so well is cut across disciplines,” says Whyte.

“To address the climate crisis, the world needs to deploy existing clean energy solutions as widely and as quickly as possible, while at the same time developing new technologies — and our goal is that those new technologies will include fusion power,” says Maria T. Zuber, MIT’s vice president for research. “To make new climate solutions a reality, we need focused, sustained collaborations like the one between MIT and Commonwealth Fusion Systems. Delivering fusion power onto the grid is a monumental challenge, and the combined capabilities of these two organizations are what the challenge demands.”

On a strategic level, climate change and the imperative need for widely implementable carbon-free energy have helped orient the PSFC team towards scalability. “Building one or ten fusion plants doesn’t make a difference — we have to build thousands,” says Whyte. “The design decisions we make will impact the ability to do that down the road. The real enemy here is time, and we want to remove as many impediments as possible and commit to funding a new generation of scientific leaders. Those are critically important in a field with as much interdisciplinary integration as fusion.”