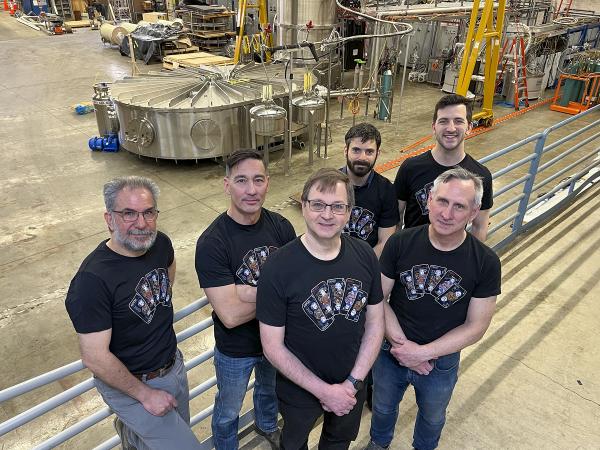 In a ceremony held on May 5, the team leaders for the Plasma Science and Fusion Center’s Toroidal Field Model Coil (TFMC), selected by the Office of the Provost along with the Office of the Vice President for Research, received 2022 MIT Infinite Mile Awards.

A testimonial read at the event provided vivid details of their efforts:

“Between May and September of 2021, in the final phase of magnet assembly and testing, the Toroidal Field Model Coil team had spent every day, including weekends, tirelessly assembling every precise part that went into the magnet and its test facility. They remained available to solve problems and ensure the project remained on track. On most nights, Ted was asleep on a futon down the hall from the cryogenic magnet (which requires 24/7 supervision), ready to return to the control room at a moment’s notice. Phil stayed hours after his 8-hour shift had ended to ensure things were progressing smoothly. Andrew was always the first person on-site early in the morning and the last to leave. Rui spent every day making sure every part fit together precisely as it should. Sam and Vinny spent days in clean-suits, climbing inside confined spaces in the vacuum vessels to carefully position every bolt. There were many things that could go wrong, and many things did go wrong: expensive parts didn’t fit, electricity shut off for a second, sensors failed. Nonetheless, it was the guidance and leadership of these six scientist and engineers, who were able to solve every problem that arose.”

The 20 Tesla magnet demonstration received world-wide attention, positioning the PSFC as a leader in the field.

The Infinite Mile Award is part of the Institute’s Rewards & Recognition Program. It recognizes exceptional employees and teams of employees who work in MIT departments, offices, labs and centers, or who are employed elsewhere and provide exemplary service the organizations.