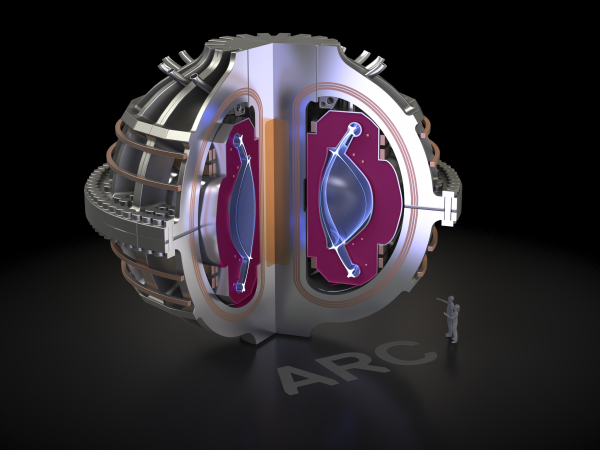 “One of the things that you get good at while at MIT,” says Sara Ferry, a research scientist in the Plasma Science and Fusion Center (PSFC), “is being able to start from nothing on a particular system or skill and knowing how to approach it in a way that’s effective.”

Ferry has been at MIT for 15 years—as an undergrad and doctoral student (both in the Department of Nuclear Science and Engineering), a postdoc, and now a research scientist—mostly working on nuclear materials and fusion, but there’s a lot of variety within that territory. She’s studied general engineering, salt chemistry, corrosion, fission, and fusion, and even pursued a startup along the way. She gestures toward a whiteboard by her computer. “It has, like, 10 different sections for all the projects that my team is working on. And they’re all very different from each other. So, intellectually, it’s very, very exciting.” What she’s most excited about at the moment is a $3-million grant that the PSFC just received from the government’s Advanced Research Projects Agency–Energy (ARPA-E) to study the generation of fuel for fusion power plants.

Whereas today’s nuclear plants operate on fission—the splitting of atoms—some of tomorrow’s plants may run on fusion, the joining of atoms. The most energetically favorable fusion reaction fuses two isotopes of hydrogen, deuterium and tritium. In deuterium, the lone proton in hydrogen’s nucleus is accompanied by a neutron, and in tritium there are two neutrons. Deuterium is abundantly found in seawater, but tritium is rare and expensive. So researchers have to harness the neutrons ejected from the fusion plasma to produce more tritium, which can be used to refuel the plant and provide startup fuel for new fusion plants.

To make tritium from neutrons, engineers must surround a fusion plant’s core with what’s called a tritium breeder blanket (which doesn’t have to look like a bed blanket). The breeding material in the blankets contains lithium, which produces tritium when it interacts with the high-energy neutrons originating from the fusion plasma. The goal of a breeding blanket is to make at least one tritium atom in the blanket for every triton consumed in the plasma. The tritium will then be used in new plants to produce more tritium and so on. Many conventional blanket designs target a tritium breeding ratio (TBR) of 1.05. But at that level, Ferry calculates, it could take a century before enough new fusion plants could be built to reach one terawatt of fusion power on the grid, a large chunk of what the United States uses today.

The PSFC will investigate the tritium breeding capabilities of the molten salt FLiBe, a mixture of lithium fluoride (LiF) and beryllium fluoride (BeF2). Dennis Whyte, PSFC’s director, notes a litany of advantages to using FLiBe over other materials. For one thing, it’s a liquid, which means it can act as both a blanket and a mode of heat transfer, flowing to and driving a turbine. That also means that it fills every nook and cranny of the space outside the core, without gaps through which neutrons can escape—“You basically get perfect shielding uniformity for free,” Whyte says. And that plant operators could drain it to replace it or perform maintenance. Further, it doesn’t suffer mechanical damage the way solid components do.

As another advantage, Whyte noted that FLiBe has a high boiling point, so it can absorb a lot of heat while remaining at atmospheric pressure. In addition, Li, F, and Be are light elements, which are better at dispersing neutron energy evenly throughout the blanket than heavier elements. FLiBe is also a poor electrical conductor, so it doesn’t interfere with the strong magnetic fields used to control the plasma in the plant’s core, and the magnetic fields don’t hinder FLiBe flow. In terms of safety, its radioactive products decay within days. And in terms of efficiency, it acts as a neutron multiplier: when a neutron hits beryllium, it ejects two neutrons, increasing the tritium breeding efficiency. The project team hopes that FLiBe could be used to create blankets with a TBR as high as 1.3, which Ferry estimates could enable a terawatt of fusion power within our lifetimes.

The team drew up plans for an experiment called BABY (Building A Better Yield) in late winter of 2020, shortly before the covid pandemic sent most of campus home. “As in baby blanket,” Ferry says. “We all kind of groaned,” but the acronym stuck. While working at home, they refined BABY into what is now known as LIBRA (Liquid Immersion Blanket: Robust Accountancy), which won an ARPA-E grant in the recent OPEN21 grant cycle. Also working with Ferry on this project are PSFC Research Scientist Ethan Peterson and PSFC Accelerators and Molten Salt Laboratories Group Leader Kevin Woller.

The design is for a metal tank about a meter across with a borehole in the center for inserting a neutron generator. The tank can be filled with FLiBe. It’s split into four independent quadrants, so they can run several experiments at once, varying temperature, salt purity, and other variables.

FLiBe presents some technical challenges that require further study. First, researchers have to refine the salt chemistry. Second, FLiBe can corrode surrounding materials. Third, they need to find the best way to retrieve the produced tritium. And finally, since beryllium salts can be toxic, the PSFC is working closely with MIT’s Environment, Health and Safety office.

Fusion research on FLiBe as a tritium breeding material lost momentum in favor of other easier-to-work-with options. “People in the community feel like this is settled science, like it’s not worth really pursuing anymore,” Ferry says. But while it perhaps didn’t make sense for older fusion plant designs, a molten salt blanket complements newer designs like the ARC fusion power plant being designed by MIT spin-off Commonwealth Fusion Systems. FLiBe will conduct heat away from ARC’s high-power-density core, and its poor electrical conductivity will allow it to move easily despite ARC’s strong magnetic fields. The combination of ARC’s demountable magnets with a drainable blanket also enables easy access to the vacuum vessel for maintenance. “High temperature superconductors”—of the kind in ARC—“are going to be a game changer for fusion,” Whyte says. And “liquid immersion blankets are simpatico with ARC’s mission.”

Ferry likes to take a historical perspective on projects, searching for an overarching narrative. “You learn quickly that science is not always settled fact,” she says. To learn about FLiBe, she went digging through typewritten research reports from the 1960s, when the Molten Salt Reactor Experiment at Oak Ridge National Laboratory successfully used FLiBe as a coolant. “It’s kind of exciting sometimes to unearth these old things.”

When they received the grant, she says, “it was really, really gratifying.” The timeline is tight. LIBRA will aim to demonstrate the tritium breeding capabilities of FLiBe within the next two years. (Later experiments will continue the work.) But Ferry appreciates the pressure. “You have to just start building it and letting it fail, and then finding out how it failed and rebuilding it,” she says. Especially if they want to keep up with fusion startups like Commonwealth Fusion Systems, which hopes to construct ARC by 2030. LIBRA could help the entire fusion industry, which is pursuing at least six other blanket technologies. “If it works, it puts a whole new piece on the gameboard.”