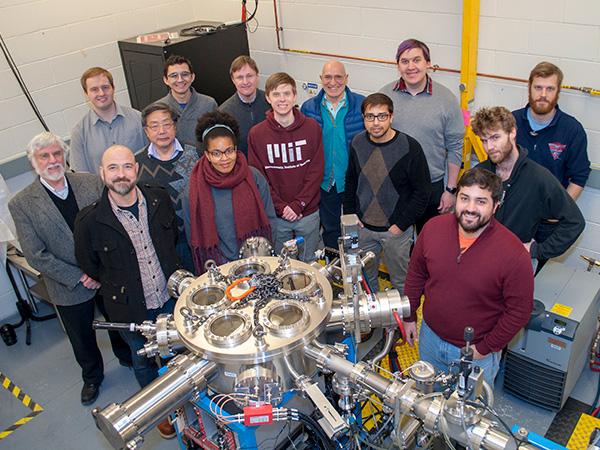 Members of the the PSFC's High-Energy-Density Physics division gather in their Accelerator Facility, part of the new Center for Excellence.

High-Energy-Density Physics (HEDP) division of MIT’s Plasma Science and Fusion Center (PSFC) along with four other universities has been awarded a five-year $10 million grant, to establish a Stewardship Science Academic Alliances (SSAA) Center of Excellence. The PSFC will be the lead partner in the Center which includes the University of Iowa, the University of Nevada/Reno, the University of Rochester and Virginia Tech.

The U.S. Department of Energy’s National Nuclear Security Administration (DOE/NNSA) award will support educational and research missions across the partners. The goal of the newly established center is to generate exceptional experimental and theoretical PhDs in HEDP and Inertial Confinement Fusion (ICF), while addressing issues of critical interest to DOE’s National Nuclear Science Administration and National Labs.

The HEDP division has a long and established history of collaboration with these labs, regularly using LLE’s 30-Kilajoule OMEGA laser, LLNL’s National Ignition Facility and SNL’s Z machine to pursue a wide range of research, including inertial confinement fusion (ICF), nuclear science and laboratory astrophysics. The division has used its Accelerator Facility to develop and characterize diagnostics for these machines, and as part of the new Center will pursue new diagnostic techniques for advanced research.

HEDP Division head and Center of Excellence director Richard Petrasso acknowledges the importance of this partnership.

“The Center is about our work in inertial confinement fusion, and also in laboratory astrophysics, simulating aspects of astrophysical phenomena, such as the jetting in the crab nebula. There is lots of interesting physics that students and staff have been observing for years. This new Center allows us, with our partners, to really expand our investigations.”

PSFC director Dennis Whyte observed that the new Center is a recognition of the HEDP Division’s excellence. Thanking the team for the exceptional work, under the encouragement of the senior leadership, he said, “Your work is one of the gems of the PSFC. This Division produces outstanding, unique science, and with a mission that is critical to National security.”

Launched in 2002, the SSAA Centers of Excellence program emphasizes areas of research that are relevant to NNSA’s stockpile stewardship mission, and promotes the education of the next generation of highly-trained nuclear scientists and engineers.