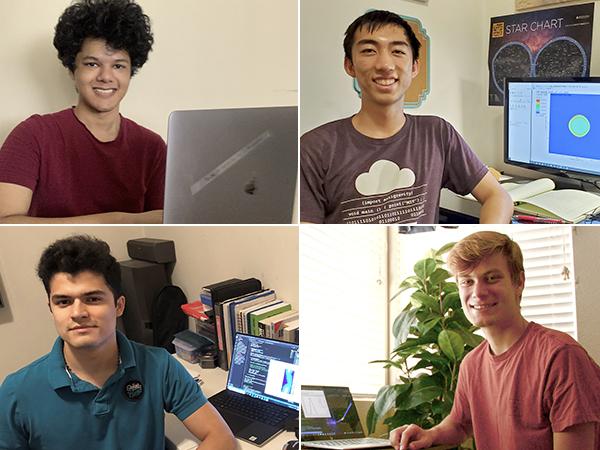 Photos courtesy of the students.

“It’s like a secret lab in a way,” says rising junior Hugo Ramirez, “a secret hide-out for mad geniuses.”

Tucked away a few blocks down Albany Street, the Plasma Science and Fusion Center’s (PSFC) Nabisco Laboratory might be off the beaten campus path, but it is no secret. A former cookie warehouse, It has been home for decades to fusion energy and astrophysical experiments. Take a left turn down the main corridor to find the High-Energy-Density Physics (HEDP) laboratory, which this summer is supporting the off-site research of Ramirez and three other students: Shaherul Haque, Bryan Sperry and Raymond Li.

The three-chambered space, with its control room and accelerator vault is unexplored territory for some of these students whose experience with the lab so far has been entirely virtual. Fortunately, to navigate their HEDP research projects this summer they needed only their computers.

The HEDP lab, under the direction of research scientist Maria Gatu Johnson, studies matter under extreme states of pressure (one million to one trillion times the atmospheric pressure at Earth’s surface). Research in this area is important for understanding how stars form, how elements are made, and how to harness fusion energy on Earth using lasers for Inertial Confinement Fusion (ICF). Laser energy is used to compress spherical capsules filled with fuel to high density and pressure in order to generate fusion reactions with the goal of self-sustained fusion burn (“ignition”) and the generation of energy.

Working closely with the 30‑KiloJoule OMEGA (60 beam) laser  at the University of Rochester and the 2‑MegaJoule (192 beam) laser at the National Ignition Facility (NIF), PSFC researchers and collaborators develop special diagnostic instrumentation that makes it possible to study spatial and temporal variations in plasma properties and electromagnetic fields. The Department of Energy (DOE) National Nuclear Security Administration Center of Excellence at MIT helps fund this work.

Gatu Johnson, who advises Bryan Sperry, notes that projects in this laboratory would typically require working hands-on in the laboratory.

“Traditionally, we have had more experimentally-oriented UROPs working on projects with an accelerator lab component,” she says, “but this summer all the projects are data analysis, coding, or simulation-related, which works very well in the current health situation.”

Learning on the job

Sperry, who began his project as a freshman in the fall of 2019, had been interested in fusion since the sixth grade when he chose to support nuclear energy in a school debate about the most viable future energy sources.

“While I was focused on fission I also encountered tantalizing snippets about the so-called ‘energy of the future – fusion,’” he says. “While I may have lost the classroom debate, I gained a passion. Fusion, and the PSFC in particular, is the reason I applied to MIT.”

He recalls telling Gatu Johnson during his UROP interview that although very interested in doing research at the Center, he actually did not have any of the skills listed in the job description.

Those skills now include updating software to measure particles scattered when a small pellet of deuterium and tritium fuel is imploded by high-energy lasers in ICF experiments at NIF and OMEGA. In this case, a code written 14 years ago to interpret the measurements of the magnetic recoil spectrometer (MRS), a deuteron detector, needed to be adjusted. It has taken longer than he anticipated, requiring that he learn C++ programming, and manage countless error messages.

Having recently declared a nuclear science and engineering major, he looks forwards to a more hands-on experience with fusion at the PSFC one day.

“It’s kind of a dream to work in fusion,” he says, “to work towards getting it as a viable power source.”

The beauty of programming

Shaherul Haque, shares Sperry’s enthusiasm for HEDP, but is happy with research that keeps him centered on the computer. While taking his first Intro to Computer Science course at MIT he has discovered a passion for the discipline.

“It’s basically problem-solving in the purest form,” says Haque, who has declared his major in computer science and engineering. “And it’s something where you get instant results; you can see it happening right in front of you. That’s the beauty of programming.”

Like Sperry, Haque is exploring the charged particles scattered in an ICF implosion, though his research is focused on tracking the deuterons, a process made difficult by the “background noise” of neutrons, protons and other radiation. The experiment uses a plastic nuclear track detector called CR39. When particles from an ICF implosion hit the detector they leave tracks through the plastic, paths that can be revealed by etching. Although CR39 can typically identify the charged particles of fusion reactions, in experiments using Tritium (T) and Helium-3 (He-3) the proton products take on a range of energies, rather than the typically discrete and singular amount of energy typical of deuteron products. These protons form a layer of background noise, making it difficult to identify and analyze the deuterons.

Haque says it is important for him to be able to separate the deuterons from the protons, and analyze their tracks, so that researchers can accurately observe and understand properties of the reaction's products without obstruction. He is developing a technique to do this “background rejection” using Python.

“Being able to distinguish particle species, as Shaherul's work is doing, will improve the measurements I make with this technique,” says Sutcliffe. “His great progress along with some nice results have generated enough material at sufficient depth for a paper.”

Similarly, Hugo Ramirez is helping graduate student Tim Johnson test a hypothesis about proton radiography, a key experimental technique used at NIF and OMEGA to probe laboratory astrophysics experiments. Johnson’s experiment also uses the CR39 detector, but for imaging the protons produced during an ICF implosion, not the deuterons. The technique allows researchers to understand the strength and shape of magnetic and electric fields present in the experiment.

Johnson hypothesizes that the quality of the proton radiography data depends on how the many lasers are directed at the sphere of fuel. Any asymmetry in the lasers, he believes, will reduce the performance. To test this hypothesis, Ramirez is developing a software framework that mimics the OMEGA laser, focusing on a number of experimental parameters that could impact the intensity of the energy created by the implosion. These include the thickness of the fuel capsule, the distance of the fuel from the lasers, and asymmetries in the positioning of the lasers.

“The UROP uses a lot more math than I thought, and obviously computer science and some physics,” says Ramirez. “Those are the areas I like the most in all of science. It’s been fun having these three disciplines connected”

His interest in math ignited when in middle school he entered a Math Olympiad in Mexico, and he later continued kindling this interest in high school competitions in El Paso. The experience provided for him an understanding of theorems, proofs and mathematical techniques he had not seen before at his grade level.

“It was eye-opening. I could understand how people like Einstein arrived at these formulas. I thought that actually, some day, I could be someone like Einstein, working in science and math.”

Sometimes a UROP project changes focus. Rising sophomore Raymond Li began his UROP during IAP ready to explore a topic similar to Ramirez: the asymmetry that can be caused when lasers hit the spherical capsule of fuel in an ICF experiment. Using the HEDP group’s computer cluster, he conducted numerical simulations to characterize the impact of various sources of asymmetry, such as non-uniform laser drive, engineering features and defects in the spherical target.

As he was continuing his research in the spring semester, his advisor, graduate student Patrick Adrian, mentioned a new opportunity. MIT’s Keith Nelson Group had requested help with a study of spherically-focused shock waves.

“They have a layer of water sandwiched between two layers of glass,” Li explains, “and they shine a laser into the water to try to generate a shock wave. The shock wave collapses inward toward the center of the water, making the pressure in the center of the water very high. This has a lot of applications: you can use it to study high pressure materials; sonoluminescence, and it might have applications to fusion.”

Li will be simulating the experiment to find what kind of parameters might generate the highest pressures.

Li, who was a member of the U.S. Physics team for the International Physics Olympiad Competition, hopes to double major in Physics and Electrical Engineering and Computer Science.

“Doing simulations is a pretty cool combination of the two,” he says. “I think it’s interesting how we can simulate physical phenomenon with computers.”

Li, Ramirez, Haque and Sperry have never met, even virtually. Still, this undergraduate quartet, working towards similar goals and for the same collaborative experiments, is a valued part of the PSFC’s high-energy-density physics team.

“They each have made major contributions by tackling important problems that we were struggling to find time for,” says Gatu Johnson. “As an added benefit, we are also happy to be able to introduce them to the field in this way, with the hope that they will become interested in staying involved in similar efforts going forward.”