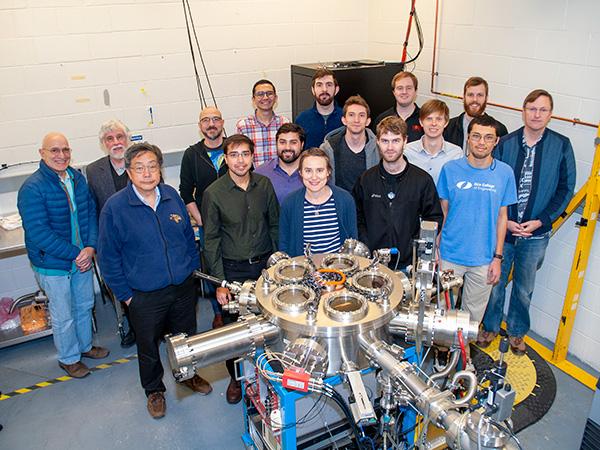 As Richard Petrasso steps down after 45 years of service, Johan Frenje and Chikang Li take on new roles.

Under Petrasso’s leadership the PSFC’s HEDP division has sustained and grown collaborations with national laboratories in the exploration of inertial confinement fusion (ICF), using its accelerator facility to develop and characterize diagnostics for experimental lasers. These collaborations were expanded in 2019 with the NNSA grant.

"One of the most important accomplishments of our Division, and that of which I am most proud,  has been the success of our PhD team’s students," says Petrasso. "Two Rosenbluth awards (for outstanding thesis in Plasma Physics in the US),  a Lawrence Fellowship, a Reines Fellowship, and an Einstein Fellowship. In addition, several of our students are now major players in the national ICF program, including Alex Zylstra (the Reines Fellowship Awardee) who led the experimental campaign for the recent record 8 August 2021 NIF shot of 1.35 MJ."

While Petrasso will continue to support the growth of the division and mentorship of PhD students, he will also spend time as senior advisor in HEDP science to NNSA, Lawrence Livermore National Laboratory, Los Alamos National Laboratory, and  the Laboratory for Laser Energetics at the University of Rochester, all organizations with which the HEDP Division have been deeply engaged for more than three decades.

Petrasso received the 2013 Edward Teller Medal in recognition of pioneering research and leadership in inertial fusion sciences and applications. He, along with Li, shared in the American Physical Society’s 2017 John Dawson Award for Excellence in Plasma Physics Research for innovative use of proton radiography.

As an MIT graduate student and PSFC research staff, Chikang Li (MIT’93) has watched the study of HEDP grow in importance and prominence. Along with his inertial confinement fusion research, Li is known for reproducing astrophysical phenomena in the laboratory, most recently adding to the understanding of collisionless shocks. He is eager to take on his new challenge.

"Rich Petrasso was my PhD advisor, and later my mentor and colleague for the past 34 years. I am grateful to him, and honored to take on the exciting and challenging responsibility as PI of the Center of Excellence,” he says. “Closely working with our talented students, experienced colleagues and Center partners, I will be committed to fulfilling the duties of this position to uplift the Center's progress, promoting the education, research and collaboration in the fields of HEDP/ICF."

Johan Frenje, who has been part of the HEPD team since starting as a postdoc in 1999, credits Petrasso as his mentor in the areas of leadership, communication and research.

“I have a lot to thank him for where I am today,” he says. “And I am looking forward to working with my colleagues within the HEDP division to make sure we generate the best HEDP-PhDs in the country; to strengthen HEDPs visibility and connections with the academic activities within MIT; to develop a broader and stronger HEDP program at MIT in collaboration with new HEDP Professor Jack Hare and others at PSFC; to strengthen our involvement at the three big ICF facilities in the country; and finally to make sure our NNSA Center of Excellence, involving the development of advanced diagnostics on the three ICF facilities, flourish for many years to come.”